The Different Types of Abortions

An abortion is a procedure in which a woman terminates her pregnancy. Generally, this is done within the first few months and is done with the assistance of a doctor.

Abortions methods fall into two major categories; medical abortions and surgical abortions. Which type of abortion is used to terminate a pregnancy will depend on which one the woman is most comfortable with, the recommendation of the doctor, and the length of time since the woman’s last menstrual cycle. Some abortion methods can only be performed within the first trimester, while others can be done safely in the second or (in extreme cases) the third trimester. 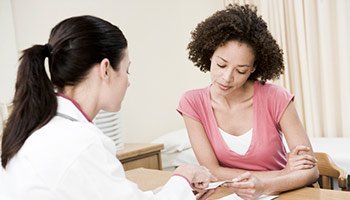 The abortion types performed in the United States are:

When considering an abortion, it’s important for you to have all the information available to make an informed decision. While you will need to consult with a doctor to decide which type of abortion is best for you and your situation, below you will find a list of abortion types and brief description of each, how they are performed, and what you can likely expect from each in terms of discomfort and recovery time.

To achieve a medical abortion the patient will take two different medications which work together to terminate the pregnancy. These two medications are mifepristone and misoprostol.

First, the woman is given an ultrasound to ensure it is early enough in the pregnancy to use this method and that the woman does not have an ectopic (pregnancy in the tubes) pregnancy.
The first medication is mifepristone. You will either take this while you’re still at the doctor’s office or bring it home with you to take there. Mifepristone blocks the hormone necessary for a pregnancy to grow.

The second medication, misoprostol, will be taken 24 to 48 hours after the first one. This pill stimulates your uterus to cramp and bleed causing the pregnancy to leave your body. This is similar to what occurs during a miscarriage. The pill will begin to work between 30 minutes and 24 hours after you take it.

When Can a Medical Abortion be Performed?

A medical abortion can be performed any time within the first 10 weeks of pregnancy. It is most effective and leads to the least amount of bleeding the earlier in the pregnancy it is performed.

Pain and Discomfort Associated With a Medical Abortion

You can expect to have heavy bleeding for several hours and bleed like a period for an average of two weeks. Most women experience strong cramps but over-the-counter medication is usually sufficient to help with the pain.

The Effectiveness of a Medical Abortion

A medical abortion is effective in 92% to 98% of cases. The earlier in the pregnancy, the more likely the success.

Vacuum Aspiration is normally performed under local anesthetic. During the procedure, the doctor will insert a speculum (a simple instrument used to make a part accessible to observation) into the vagina and cervix. A thin tube connected with a handheld syringe will then be inserted into the uterus through the cervix. The doctor will operate the syringe to suction the tissue from the uterus. This is called a Manual Vacuum Aspiration. Sometimes a mechanical suctioning device is used and this is called simply Vacuum Aspiration.

During a vacuum aspiration the uterus will contract producing a cramping sensation in most women. When the tube is withdrawn, these cramps subside. At times, during the procedure, the woman may sweat, get nauseous, or feel faint.

When can Vacuum Aspiration be Performed?

This abortion procedure used from 3 weeks to 12 weeks since the last period. As it is with other different types of abortion, the sooner in the pregnancy this is performed, the better.

Pain and Discomfort Associated with this Abortion Method

During the first two weeks after a Vacuum Aspiration, most women experience irregular bleeding or spotting. Cramps, similar to those during a menstrual cycle, may be present for several hours, up to a few days, as the uterus recovers and returns to its normal size.

The Effectiveness of Vacuum Aspiration

This abortion method is safe and effective and has few risks or potential complications.

Combining vacuum aspiration with the use of a handheld device to remove any remaining tissue, this procedure can be performed with local anesthetic at an outside clinic or surgical facility as an outpatient procedure.

When can a Dilation and Curettage be Performed?

Dilation and Curettage (D&C) can be performed within weeks 2 to 12 of the beginning of pregnancy.

Pain and Discomfort Associated with this Abortion Method

There will be some pain and discomfort during the procedure. The first two weeks after a D&C most women experience irregular bleeding or spotting. Cramps, similar to those during a menstrual cycle, may be present for several hours, up to a few days, as the uterus recovers and returns to its normal size.

The Effectiveness of a Dilation and Curettage

This abortion method is safe and effective and has few risks or potential complications.

Similar in all the other ways to a Dilation and Curettage, a D&E also involves other instruments (such as forceps) along with suction to empty the uterus.

Women undergoing a D&E will need to have their cervix opened wider to allow room for larger pregnancy tissue to be removed. The cervix will need to be softened and dilated ahead of time. Early in the second trimester this process may take as little as a few hours. It can take as long as a two days to prepare the cervix later in the trimester.

When can a Dilation and Evacuation be performed?

D&E abortions are typically performed during the second trimester (between the 13th and 24th weeks of pregnancy).

Pain and discomfort associated with Dilation and Evacuation

Your doctor may recommend stronger pain medication or sedatives for a D&E than for a vacuum aspiration or D&C, in addition to local anesthesia in the cervix.

Effectiveness of a Dilation and Evacuation

Dilation and Evacuation (D&E) is a safe and effective abortion procedure that accounts for the majority of second-trimester abortions in the United States.

The patient will be given strong medications for pain and sedatives as needed.

You will have blood tests and an ultrasound exam, and the clinician may use special dilators to prepare your cervix.

As the name implies, induction abortion involves medications that cause (induce) the uterus to contract and expel the pregnancy.

Once the contraction have been induced mild cramping normally occurs, getting stronger and then easing off. The strength and intensity of this cramping varies. Each person is different. When the amniotic sac breaks there will be a rush of warm liquid expelled through the vagina. More pressure will follow as the fetus is expelled. If the placenta does not come out on its own within a few hours, the doctor will remove it.

The patient should plan for an overnight stay in the hospital or hotel located near the clinic.

When Can an Induction Abortion be Performed?

After a certain point in pregnancy (usually around 24 weeks), a dilation and evacuation (D&E) procedure can no longer be performed and an induction abortion or a hysterotomy are the only options.

The experience of an induction abortion is similar to labor, although as the fetus is smaller than a full-term baby the process may last a shorter time. Painful contractions can last for several hours or even a day or so.

Effectiveness of a Labor Induction Abortion

This type of abortion is completely effective.

Hysterotomy (similar to a C-Section)

The hysterotomy abortion method is performed in a hospital under local (numbing the lower part of the body) or general anesthesia (patient is fully asleep throughout the procedure). It’s a surgical procedure that involves making an incision through the abdomen into the uterus to remove uterine contents. A hysterectomy is performed in a manner similar to a C-Section.

When Can an Induction Abortion be Performed?

After a certain point in pregnancy (usually around 24 weeks), a dilation and evacuation (D&E) procedure can no longer be performed and an induction abortion or a hysterotomy are the only options.

This surgery is performed under general anesthetic or a local anesthetic which numbs the entire lower part of the body. Pain medications will be given as needed following the operation.

The Effectiveness of a Labor Induction Abortion

This method is completely effective, however, due to the extensiveness of the surgery, it is considered an abortion method of last resort.

You may be going through a difficult time. But remember, you’re not alone. There are experienced and caring people here who can help you get through it.

It’s important you talk to a doctor as soon as possible. The two of you will discuss your particular situation and the options you have available.

The first step is to call and make an appointment. You’ll feel better talking to the doctor and knowing which option is best for you.

Is the Abortion Pill Safe? And How Effective Is It?

What Can I Expect Before During & After I Take the Abortion Pill?
Scroll to top