IUDs are one of the best birth control methods out there — more than 99% effective. That means fewer than 1 out of 100 people who use an IUD will get pregnant each year. Read more about our IUD offerings. 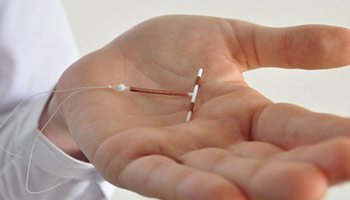 IUDs are so effective because there’s no chance of making a mistake. You can’t forget to take it (like the pill), or use it incorrectly (like condoms). Also, you’re protected from pregnancy 24/7 for 3 to 10 years, depending on which kind you get. Once your IUD is in place, you can pretty much forget about it until it expires!

Do IUDs protect against STDs?

No, IUDs don’t protect against STDs. Luckily, using condoms or internal condoms every time you have sex does lower the chance of getting or spreading STDs. So, using condoms with your IUD is the way to go.

Risks
Less than 1 percent of women who use ParaGard will get pregnant in the first year of typical use.

If you do conceive while using ParaGard, you’re at high risk of an ectopic pregnancy – when the fertilized egg implants outside the uterus, usually in a fallopian tube. But because ParaGard prevents most pregnancies, the overall risk of having an ectopic pregnancy is lower than it is for sexually active women who don’t use contraception. If you do have an ectopic pregnancy, you will have to terminate the pregnancy. ParaGard doesn’t offer protection from sexually transmitted infections (STIs).

Side effects associated with ParaGard include:

Mirena is generally safe. But it’s important to remember that:

Side effects associated with Mirena include:

Your health care provider may recommend removal of Mirena if you develop:

WHAT DRUGS INTERACT WITH MIRENA?
Mirena may interact with insulin, blood thinners, or steroids.

Risks
The most common side effect of Liletta is that one in five women stop having a period after a year of use. Depending on how you feel about periods, this could be a drawback or a serious benefit. Women in the study reported a variety of other side effects. The way the study was designed, we just don’t know which of them were caused by Liletta versus being caused by something else. That said, the most commonly reported side effects included discomfort in the belly or pelvis (13%), acne (12%), headache (10%), nausea (8%), and breast tenderness (7%).

Other common side effects are similar to those listed above with Mirena.

Risks
Pain, bleeding or dizziness during and after placement is a possible side effect. If these symptoms do not stop 30 minutes after placement, Skyla may not have been placed correctly. Your healthcare provider will examine you to see if Skyla needs to be removed or replaced.

Other side effects and risks include:

Expulsion
Skyla may come out by itself. Expulsion occurs in about 3 out of 100 women. You may become pregnant if Skyla comes out. If you think that Skyla has come out, use a backup birth control method like condoms and spermicide and call your healthcare provider.

Missed menstrual periods
About 1 out of 16 women stop having periods after 1 year of Skyla use. If you do not have a period for 6 weeks during Skyla use, call your healthcare provider. When Skyla is removed, your menstrual periods should return.

Cysts on the ovary
About 14 out of 100 women using Skyla develop a cyst on the ovary. These cysts usually disappear on their own in two to three months. However, cysts can cause pain and sometimes cysts will need surgery.

Risks
Kyleena is similar to the other hormonal IUDs with the risks and side effects like headaches, dizziness, pain, bleeding, irregular or missed periods and so forth. After your body adjusts to Kyleena it is normal to have fewer bleeding days during your menstrual periods and some women even stop having periods all together. This will not affect your ability to become pregnant after stopping use of Kyleena.

There are no known drug interactions with Kyleena but you should consult your provider and inform them on what medications you are currently taking or will be taking to see if there is anything to be concerned with.

The birth control implant that goes in your arm.

The birth control implant Nexplanon is a tiny, thin rod about the size of a matchstick. The implant releases hormones into your body that prevent you from getting pregnant. A nurse or doctor inserts the implant into your arm and that’s it — you’re protected from pregnancy for up to 5 years. It’s get-it-and-forget-it birth control.

The birth control implant is a tiny, thin rod about the size of a matchstick. It’s also called Nexplanon and there’s a slightly older version called Implanon. A doctor inserts the implant under the skin of your upper arm. It releases the hormone progestin to stop you from getting pregnant.

The hormones in the birth control implant prevent pregnancy in two ways:

Progestin thickens the mucus on your cervix, which stops sperm from swimming through to your egg. When sperm can’t meet up with an egg, pregnancy can’t happen.

Progestin can also stop eggs from leaving your ovaries (called ovulation), so there’s no egg to fertilize. When eggs aren’t released, you can’t get pregnant.

Overall
IUDs have become increasingly popular over the last several years. Overall IUDs are safe. Some women do have side effects, but most are mild. Serious problems with them are rare. Of course, there are the few incidences where a significant side effect has occurred. If you suspect anything abnormal you should contact your provider. We are always here to help you with whatever you may need! Don’t hesitate to call us with any questions or concerns.

What happens to your body after a miscarriage?

What is an IUD?
Scroll to top