10 Abortion Myths No One Should Believe – Abortion Facts

When it comes to something as important as your health, lending too much credit to myths can be dangerous. In the case of abortion, these myths often have no basis at all.

Truth is, abortion is one of the most widely scrutinized medical procedures, which has led to a tremendous amount of research. It is this research that proves that all of these myths, are false. 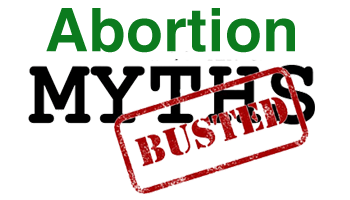 So, what are these myths exactly? Where did they come from? What is the truth?

Below we will delve into the myths surrounding abortion, and why no one should believe them.

Since many women who consider abortions have the hopes of conceiving in the future, it is only natural to be concerned about fertility.

Because abortion is labeled as a surgery, women often perceive it as an invasive procedure. The misinformation spread that abortion causes pain, or is a risky procedure that involves scraping out the uterus- only continues to propagate this falsehood.

Truth
There is absolutely no link between abortion and infertility. In fact, women have the ability to get pregnant immediately after an abortion.

Myth 2: Women who get an abortion feel guilty afterwards

Women choose abortion for a wide variety of reasons, and these reasons will affect each woman in their own way. Sadness may accompany the decision, but what is known as Post Abortion Syndrome, was an idea propagated by “crisis pregnancy centers” that heavily promoted that getting an abortion damages a woman psychologically.

Truth
A peer reviewed research study indicates that 99% of women feel no regret in their decision to get an abortion.

In fact, any negative emotion felt was typically a result of the stigma surrounding abortion, and the judgement they receive from becoming pregnant in the first place.

In 2008, the American Psychological Association (APA) released a report stating no solid scientific evidence was found that link abortion to mental distress. And in 2010, the Alan Guttmacher Institute released further documents stating that women will endure psychological issues as a result of abortion.

There was a time when abortions were very dangerous. This is because they were illegal, and women sought out back alley abortions or attempted their own methods including consuming large quantities of alcohol, injuring themselves or having others do it for them. These methods led to dangerous infections and other complications.

It is never advised to seek those methods. Abortion is legal, and has been for several decades, which provides women with much safer alternatives.

In fact, properly/legally performed abortions are considered one of the safest medical procedures- with a risk of complication at less than .05% according to the CDC.

Risk of death is 11 times greater with childbirth than abortion. While the risks do go up the longer into gestation the abortion is performed, the risks, even with a late term abortion, are far below the risks present with childbirth.

There are several methods of abortion, the pill being the most widely used (9 out of 10 abortions are performed using the pill). To learn more about abortion options, read our article “The Different Types of Abortions.”

Myth 4: Women are using abortion as a form of birth control

1 in 3 American women will have an abortion by the age of 45 (and a good 60% of those women are already mothers), yet this myth formulates the notion that it is a much smaller concentration of women.

This myth has risen to paint women who choose abortion as irresponsible. There are a lot of reasons to do this, ranging from a want to push women towards consciously using birth control, to creating shame and blame.

There is a great urge to blame women for their unwanted pregnancies, but in most cases, women are actively using birth control. It simply fails them.

Truth
Birth control isn’t failsafe. Condoms leak or break during sex, birth control methods like the birth control pill have a very high rate of effectiveness, but there is still a small percentage that it doesn’t work.

What this myth doesn’t account for is the rate of effectiveness for the dozens of different methods of birth control, as well as the access to birth control, especially in rural or impoverished communities.

There is also the case for medically necessary abortion- in which a woman wants to have a child, but the fetus is posing a danger to the mother’s health or is considered no longer viable.

It’s worth nothing that every year approximately 1.3 million women have an abortion, 90% of which are within the first trimester. Their reasons are innumerable.

There is great sympathetic concern that a fetus could feel pain during an abortion. This is developed from the thought of a fetus as a baby.

It’s one of the most widely used arguments and insults thrown at women to pressure and guilt them into continuing with a pregnancy that is unwanted and may even be causing harm to their health.

Truth
Pain is a result of our neocortex- a part of our nervous system- which isn’t developed until at least 24 weeks of gestation.

There is an argument that these pain receptors aren’t developed until 29-30 weeks of gestation (the third trimester)- a result of a study in the Journal of American Medicine.

99% of abortions, miscarriages, and ectopic pregnancies, are taken care of within the first trimester, long before the fetus would feel any pain.

Myth 6: Women are coerced into having an abortion (or are selfish)

There are a lot of reasons for a woman make the decision to get an abortion.
Some of these reasons include:

Truth
In 2005, the Guttmacher Institute found that less than 1% of women cited pressure as their main reason for having an abortion.

In conjunction, in 2013, the UCSF found that while women rarely claimed coercion as their reason for seeking abortion, but instead cited a desire to escape domestic relationship or a faulty relationship.

Myth 7: Abortions are painful and involve scraping of your insides

There is an abortion procedure called manual vacuum aspiration abortion, which involves emptying the uterus using a suction device.

Generally, people don’t like the idea of surgery or anything even remotely invasive. While it is a natural fear, it shouldn’t apply to even this method of abortion.

It is only one abortion option, which is typically used in later term pregnancies. No incisions are made during this procedure, and it can be performed in a matter of ten minutes without any pain associated.

Truth
Since 91.6% of abortions are performed within the first 13 weeks of pregnancy, the abortion pill, also known as a medical abortion, is the most frequently chosen method of termination.

Only 7.1% of abortions occur between 14-20 weeks and only 1.3% are performed after 21 weeks, each requiring a method other than the pill abortion.

This means that the vast majority of abortions are performed with a medical (pill) abortion- which involves a medically induced miscarriage.

There are no long-term side effects associated with any abortion method.

Myth 8: Most women get their abortion in the second or third trimester

This myth is tied into the notion that a woman should feel guilt, shame, blame, and irresponsibility for their choice. It’s also an attempt to categorize all women who make the choice to get an abortion as “bad people”.

This argument is made in conjunction with the myth that a fetus feels pain (and other such myths).

That’s 1.3 million women each year receiving abortion services within the first 13 weeks of pregnancy. Some reasons why women might wait until later in gestation:
Recommended by doctor for health reasons
They didn’t know they were pregnant
Medical complication which appeared later in pregnancy
Indecision due to social pressures
Legislation which delayed the chance to get an abortion any sooner (state requirements for counseling, medical examinations before services, or availability of clinics)

For more information, read our article on the “Abortion Timeline“.

Myth 9: Abortions are easy to get

The creators of these myths want to develop the notion that abortions are easy, simple, and widely available.

If clinics are seen to be a widely available resource, those with any sense of opposition will feel as if their ideals of right and wrong are being encroached. They’ll feel surrounded and want to fight harder against it.

This myth also creates the sense that women are willingly and easily undergoing this procedure- that they don’t care because it’s easy.

Truth
Abortions are chosen for a lot of reasons, and while the result is often a sense of relief, it isn’t a choice women want to make.

In addition, in the last few years, the number of clinics in each state have been on the decline, and the amount of legislation against and restricting abortions have increased.

If you’d like to read information the Guttmacher Institute has compiled from each state regarding number of clinics and abortion legislation, click here!

Because it sounds like a scientific claim, this myth has continued to funnel through society and create wariness in those considering abortion.

Truth
There is no link between breast cancer and abortion.

In 2003, the National Cancer Institute regarded the expertise of 100 of the world’s leading breast cancer and cancer risk experts. They concluded that there was no risk in developing cancer after having an abortion.

The New England Journal of Medicine also came to the same conclusion after conducting a study of 1.5 million women.

What You Should Believe – Abortion Facts

Abortion myths have created an inhospitable environment for women seeking abortion services. In some cases, abortion may be medically necessary, yet women don’t seek the help they need because of the mentality these myths have generated.

The vast majority of abortions are carried out in the first 13 weeks of gestation using the pill (medical abortion), but all abortion methods are safe, can be done quickly, and can be performed without discomfort.

There are a lot of reasons for a woman to choose abortion, and myths should never be listened to over the advice and expertise of licensed professionals.

For more facts on abortion, or answers to frequently asked questions, visit our FAQ page, or contact us today.

How Early or Late Can You Get an Abortion?